The village of Agros, among others, is famous mainly for the fragrant roses that are cultivated in the area and from which the distillation of Rodostagma Agros takes place.

The story begins in 1917 when Nearchos Clerides, a teacher in the village, envisioned the spread of rose cultivation (Rosa Damascene) by founding the 'Students' Association for the Propagation of the Rose'. The production of rosewater started immediately with the first distillery in 1918 operating in the Field Boys' School. Over time, the demand for Rodostagma Agros increased, as the villagers saw and experienced the benefits offered by the cultivation of rhodes. 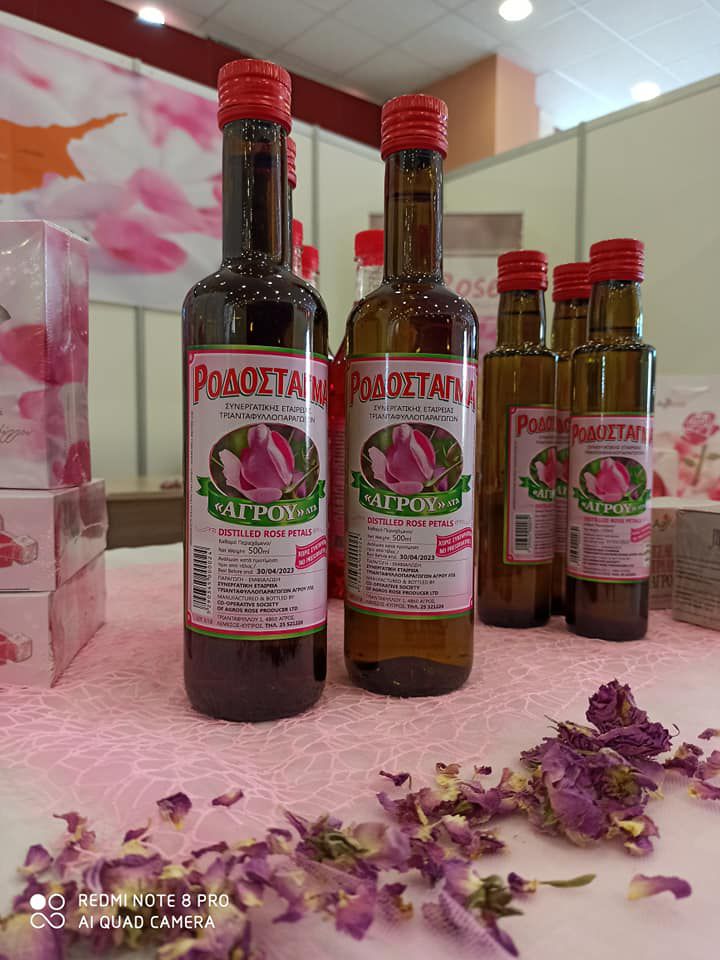 From 1961 until today, the distillation and marketing of Rodostagma has been undertaken by the Cooperative Company of Rose Field Producers.

After the distillation is completed, the rosewater is stored in large tanks and then bottled. Clinical studies have shown that rosehip contains primary acids, which have mild, anti-inflammatory, antiseptic, healing and whitening properties, which made the further exploitation of rosehip particularly important.

In recent years, the Company, seeing the exceptional properties of rosehip, has proceeded to the preparation of a series of cosmetic products and traditional sweets under the brand name Agrose Rose Products, such as food products, based on rosehip and rose oil, rose syrup, rosehip loukoumia, indria , caramelized nuts, rose chocolate, rose tea.

The roses that will give the rose drop are picked up in the morning and specifically from 6 in the morning until 10, so as not to lose the smell of the roses and their essential oils. The flowers of the rose contain essential oils, which to date have been recognized by about 400, by various methods, such as mass chromatography. Then, the roses are placed the same day with water in a modern distiller with a capacity of 600 kg and heated to a high temperature around 85 ° C.

The water vapor generated is led to condensers, where they are liquefied. The finished distillate ends up in large isothermal tanks with a capacity of up to 1,000 liters and then the bottling process begins. It is very important to note that no preservatives are added to Rodostagma.

Rodostagma Agrou was awarded as the Cypriot Product of the Year 2018, at Eating Awards.